This is a run for your life, escape your fate game. You made a deal with Death but you don’t want to live up to your end. Jump, collect souls, and escape from Death’s grip!

The game consists of you making a deal with Death for money and immortality. Your character then decides to steal the contract for without it Death has no valid claim on your soul. Your job is to escape from Hell with the contract and not let Death catch you. The mechanics are quite simple but the challenge is very real. You can move and jump with which you collect souls to unlock your pathway forward, however Death is following you at every moment creating a tense environment in which to maneuver.

This game is for anyone who loves a challenge but who can’t spend a lot of time on a game. The only game I can think of that is similar in some fashion (though I’m sure there are many more I’m not aware of), would be certain levels of N+. The simplicity of the game is quite apparent but the challenge is not. You must execute precise timing to complete all the levels and win your soul. 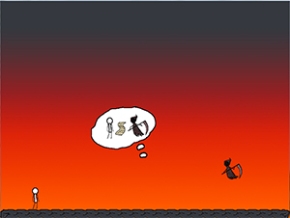 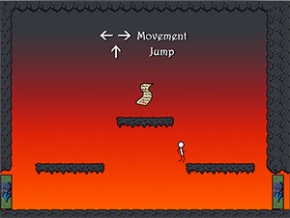 This game was created using a brain-storming method that was created for our class. We had to choose any number of cards and link them, using each one in the game and going from there.

What I wanted to do first was create the concept for the game and then flesh out the mechanics before I really delved into it. So I sketched out some ideas, wrote some notes, and then made a basic run of the game with only the very basic mechanics.

I’ve had a little experience in Game Maker before so I knew a bit about the scripting language (not that I didn’t look online for help, but that I could modify the code to suit my needs) but I also knew a little bit about the drag & drop system. This is probably the hardest thing for me when using Game Maker. I never know whether to use the coding or drag & drop and sometimes I can’t figure out how to make some thing work either way. The logic in Game Maker sometimes makes absolutely no sense to me but I struggled on. 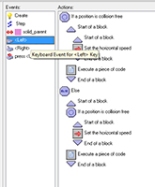 From there I created all the art assets and just plugged them into the game. I knew tile sets were the easiest way to go so I created one of those and used it with a solid object placeholder, but that’s just basic. Once I added all the art you can see that things start to come together. One thing I was happy to figure out though was using Alarms. This allowed me to make basic sequences of events to portray the story in a symbolic fashion without having to create a video and import it (or however you incorporate video into Game Maker).

Another thing I had both trouble with and found myself to be able to overcome and relish in it was creating a believable object with minimal pixels. For the gateway for instance, when I first created it it was very bland. I knew I wanted something eldritch or mystical for it but I didn’t know how to convey it. I tried to create a menacing looking door but that wasn’t working. So I tried a new approach, I looked up symbols and used a 5×3 grid to create them. This turned out better than I anticipated! It’s amazing how well things can be conveyed with such a small amount of pixels. Albeit some things need more pixels but you can still be convincing even without a lot of wiggle-room! I also found that when doing pixel art, shading is vital. You need to give something depth quickly and easily so even a one pixel inner border of a lighter hue or darker shade can make all the difference to a person’s eye.

In the future I would love to add more levels and possible new mechanics such as sliding or being able to distract Death for a little bit. Making this game made me realize that there aren’t that many chase games in this line, so perhaps, with some more tweaking and experience, I could create a game like this that could be played on someone’s portable device (whether it be phone, handheld game platform or whatever the future holds).

Note: All sounds were found on YouTube and used without permissions. The sounds belong solely to those who created them and have license to them. (i.e. Square-Enix, CyberConnect2, and/or anyone who owns the sounds).

Everything done by me except the making of sounds. Those belong to their respective creators and owners. I did however cut some sounds down to shorter versions.